Wise Words from the Woman of the Month

Be bold. If you're going to make an error, make a doozy, and don't be afraid to hit the ball. 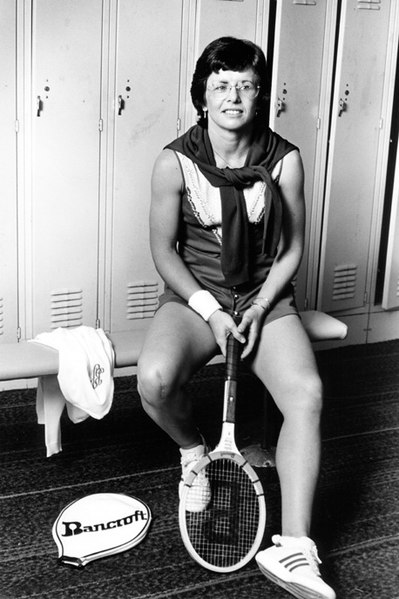 An Interview with Billie Jean King

One of the most successful and popular professional tennis players in the history of the sport—the holder of seventy-one singles titles—Billie Jean King used her celebrity to advocate equality for women and men in earnings and respect, not only in tennis but in other careers as well. Perhaps her most well-known victory in this regard was achieved in 1973 when she defeated Bobby Riggs in their highly publicized “Battle of the Sexes” exhibition match.

Born Billie Jean Moffitt on November 22, 1943, in Long Beach, California, she showed early promise as an athlete, participating in a variety of male-dominated sports, including football and baseball. During adolescence, however, she began to focus exclusively on tennis. Her first major tennis success came in 1961, when she teamed up with Karen Hantze to win the doubles championship at Wimbledon. In 1966, she won her first Wimbledon singles title and was ranked first in the world. Also in 1966, she married law student Larry King. She took her husband's name but, unlike many women in the 1960s, chose not to abandon her career.

In 1968, Billie Jean King turned professional, but the transition did not bring instant riches. Female athletes earned much less money than their male counterparts, and King protested the inequality. In 1972, after receiving $15,000 less than her male counterpart for winning the U.S. Open, King demanded that the prize money be made equal by the next year, or she would not play. During the course of the following season, she helped establish the Women's Tennis Association, a player's union. And indeed, the U.S. Open became the first major tournament to offer equal prize money to men and women.

The “Battle of the Sexes,” held at the Houston Astrodome on September 23, 1973, was perhaps the most famous tennis match of King's career. She accepted the challenge to play the 1939 Wimbledon men's singles champion Bobby Riggs, then fifty-four, who openly bragged that he was a “male chauvinist pig” and stated, “Women belong in the bedroom and kitchen, in that order.” Leading up to the best-of-five-sets match, Riggs publicly taunted King, arguing that a female tennis player of her stature could never defeat him. In accepting the challenge, King declared it an important battle in the war for women's equality. The televised match was at the time the most watched tennis event in history, with 90 million viewers. King defeated Riggs 6–4, 6–3, 6–3, taking the $100,000 purse and declaring a momentous victory for gender equality.

During that memorable year, King had an extramarital affair with Marilyn Barnett, who eight years later outed the tennis star as a lesbian in an unsuccessful palimony suit. In time, King grew comfortable being identified as a lesbian and spoke of it publicly. In a biographical HBO television documentary, Billie Jean King: Portrait of a Pioneer (2006), King and her companion of many years, Ilana Kloss, openly discuss their relationship.