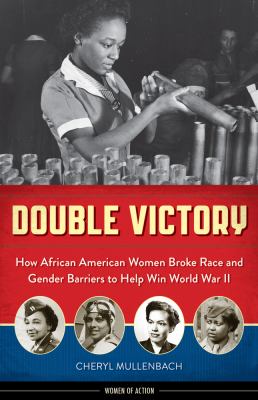 Winner of: 2014 Amelia Bloomer Top Ten List “Allow all black nurses to enlist, and the draft won’t be necessary. . . . If nurses are needed so desperately, why isn’t the Army using colored nurses?” “My arm gets a little sore slinging a shovel or a pick, but then I forget about it when I think about all those boys over in the Solomons.” Double Victory tells the stories of African American women who did extraordinary things to help their country during World War II. In these pages young readers meet a range of remarkable women: war workers, political activists, military women, volunteers, and entertainers. Some, such as Mary McLeod Bethune and Lena Horne, were celebrated in their lifetimes and are well known today. But many others fought discrimination at home and abroad in order to contribute to the war effort yet were overlooked during those years and forgotten by later generations. Double Victory recovers the stories of these courageous women, such as Hazel Dixon Payne, the only woman to serve on the remote Alaska-Canadian Highway; Deverne Calloway, a Red Cross worker who led a protest at an army base in India; and Betty Murphy Phillips, the only black female overseas war correspondent. Offering a new and diverse perspective on the war and including source notes and a bibliography, Double Victory is an invaluable addition to any student’s or history buff’s bookshelf. 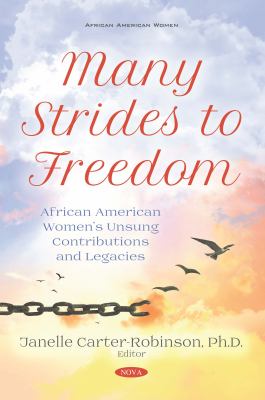 "To struggle and battle and overcome and absolutely defeat every force designed against us is the only way to achieve."- Nannie Helen BurroughsAfrican American women have been integral to the various fights for equality throughout American history. Their importance to the movement occurred long before lifelong activist Rosa Parks became the catalyst in the Montgomery Bus Boycott in 1955. Who are the countless and often nameless black women who risked their lives and worked tirelessly to fight for the equality of black people in this country? From slavery to the modern day civil rights movement, the contributions of African American women are often overlooked in the retelling of history, but their contributions were critical in the battle for racial equality. They were grassroots organizers, strategists, and educators. Due to their selflessness and kindness, these black women became heroines of the movement. This book seeks to unearth the contributions of African American women throughout various periods of American history. 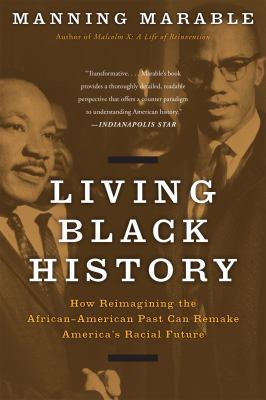 Are the stars of the Civil Rights firmament yesterday's news? In Living Black History scholar and activist Manning Marable offers a resounding "No!" with a fresh and personal look at the enduring legacy of such well-known figures as Malcolm X, Martin Luther King, Jr., Medgar Evers and W.E.B. Du Bois. Marable creates a "living history" that brings the past alive for a generation he sees as having historical amnesia. His activist passion and scholarly memory bring immediacy to the tribulations and triumphs of yesterday and reveal that history is something that happens everyday. Living Black History dismisses the detachment of the codified version of American history that we all grew up with. Marable's holistic understanding of history counts the story of the slave as much as that of the master; he highlights the flesh-and-blood courage of those figures who have been robbed of their visceral humanity as members of the historical cannon. As people comprehend this dynamic portrayal of history they will begin to understand that each day we-the average citizen-are "makers" of our own American history. Living Black History will empower readers with knowledge of their collective past and a greater understanding of their part in forming our future. 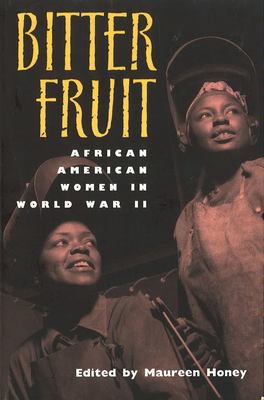 Despite the participation of African American women in all aspects of home-front activity during World War II, advertisements, recruitment posters, and newsreels portrayed largely white women as army nurses, defense plant workers, concerned mothers, and steadfast wives. This sea of white faces left for posterity images such as Rosie the Riveter, obscuring the contributions that African American women made to the war effort. In Bitter Fruit, Maureen Honey corrects this distorted picture of women's roles in World War II by collecting photos, essays, fiction, and poetry by and about black women from the four leading African American periodicals of the war period: Negro Digest, The Crisis, Opportunity, and Negro Story. Mostly appearing for the first time since their original publication, the materials in Bitter Fruit feature black women operating technical machinery, working in army uniforms, entertaining audiences, and pursuing a college education. The articles praise the women's accomplishments as pioneers working toward racial equality; the fiction and poetry depict female characters in roles other than domestic servants and give voice to the bitterness arising from discrimination that many women felt. With these various images, Honey masterfully presents the roots of the postwar civil rights movement and the leading roles black women played in it. Containing works from eighty writers, this anthology includes forty African American women authors, most of whose work has not been published since the war. Of particular note are poems and short stories anthologized for the first time, including Ann Petry's first story, Octavia Wynbush's last work of fiction, and three poems by Harlem Renaissance writer Georgia Douglas Johnson. Uniting these various writers was their desire to write in the midst of a worldwide military conflict with dramatic potential for ending segregation and opening doors for women at home. Traditional anthologies of African American literature jump from the Harlem Renaissance to the 1960s with little or no reference to the decades between those periods. Bitter Fruit not only illuminates the literature of these decades but also presents an image of black women as community activists that undercuts gender stereotypes of the era. As Honey concludes in her introduction, "African American women found an empowered voice during the war, one that anticipates the fruit of their wartime effort to break silence, to challenge limits, and to change forever the terms of their lives." 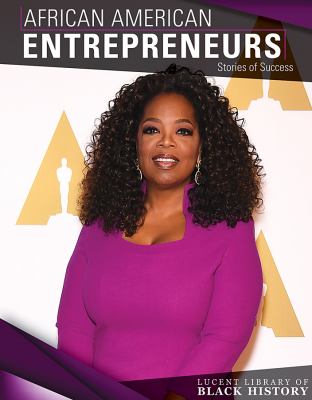 Starting a business is inherently risky, but it has historically been much harder for African Americans due to the systemic racism they face in many different areas. However, many black entrepreneurs have overcome those barriers to create successful businesses, working harder than their white counterparts to achieve similar results. Readers will learn about the history of discrimination against African Americans in the business world and how it has been and still can be combated. Historical and contemporary photographs and a comprehensive timeline shine a spotlight on many African American entrepreneurs who have changed the world. 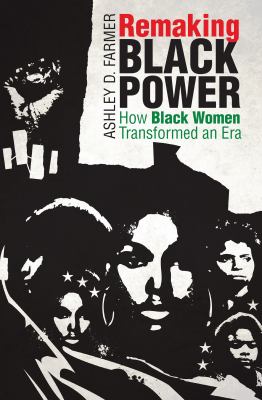 In this comprehensive history, Ashley D. Farmer examines black women's political, social, and cultural engagement with Black Power ideals and organizations. Complicating the assumption that sexism relegated black women to the margins of the movement, Farmer demonstrates how female activists fought for more inclusive understandings of Black Power and social justice by developing new ideas about black womanhood. This compelling book shows how the new tropes of womanhood that they created--the "Militant Black Domestic," the "Revolutionary Black Woman," and the "Third World Woman," for instance--spurred debate among activists over the importance of women and gender to Black Power organizing, causing many of the era's organizations and leaders to critique patriarchy and support gender equality. Making use of a vast and untapped array of black women's artwork, political cartoons, manifestos, and political essays that they produced as members of groups such as the Black Panther Party and the Congress of African People, Farmer reveals how black women activists reimagined black womanhood, challenged sexism, and redefined the meaning of race, gender, and identity in American life. 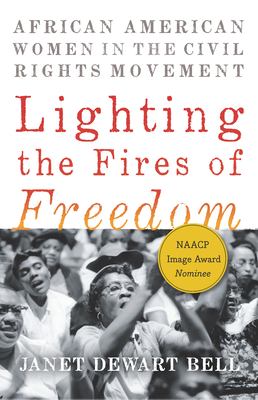 Lighting the Fires of Freedom: African American Women in the Civil Rights Movement

Recommended by The New York Times, The Washington Post, Book Riot and Autostraddle Nominated for a 2019 NAACP Image Award, a groundbreaking collection of profiles of African American women leaders in the twentieth-century fight for civil rights During the Civil Rights Movement, African American women did not stand on ceremony; they simply did the work that needed to be done. Yet despite their significant contributions at all levels of the movement, they remain mostly invisible to the larger public. Beyond Rosa Parks and Coretta Scott King, most Americans would be hard-pressed to name other leaders at the community, local, and national levels. In Lighting the Fires of Freedom Janet Dewart Bell shines a light on women's all-too-often overlooked achievements in the Movement. Through wide-ranging conversations with nine women, several now in their nineties with decades of untold stories, we hear what ignited and fueled their activism, as Bell vividly captures their inspiring voices. Lighting the Fires of Freedom offers these deeply personal and intimate accounts of extraordinary struggles for justice that resulted in profound social change, stories that are vital and relevant today. A vital document for understanding the Civil Rights Movement, Lighting the Fires of Freedom is an enduring testament to the vitality of women's leadership during one of the most dramatic periods of American history. 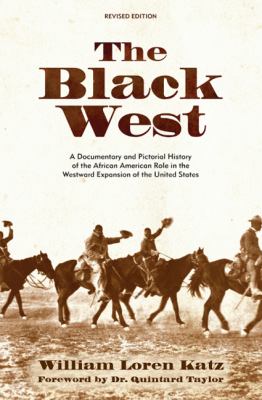 The Black West: A Documentary and Pictorial History of the African American Role in the Westward Expansion of the United States

This entirely new edition of a famous classic has glorious new photographs -- many never before seen -- as well as revised and expanded text that deepens our understanding of the vital role played by African American men and women on America's early frontiers. This revised volume includes an exciting new chapter on the Civil War and the experiences of African Americans on the western frontier. Among its fascinating accounts are those explaining how thousands of enslaved people in Arkansas, Missouri and Texas successfully escaped into the neighbouring Indian Territory in Oklahoma. These runaways inspired the idea eventually adopted as the Emancipation Proclamation, which freed slaves within the states that were in rebellion. Inspired by a conversation that William Loren Katz had with Langston Hughes, The Black West presents long-neglected stories of daring pioneers like Nat Love, a.k.a. Deadwood Dick; Mary Fields, a.k.a. Stagecoach Mary; Cranford Goldsby, a.k.a. Cherokee Bill -- and a host of other intrepid men and women who marched into the wilderness alongside Chief Osceola, Billy the Kid, and Geronimo.