Victoria Woodhull: The First Woman to Run for U.S. President

“I shall not change my course because those who assume to be better than I desire it.”

"The first woman to run for president of the United States, Victoria Woodhull was a candidate for the office in 1872 and in 1892. A protégée of Cornelius Vanderbilt, Woodhull was also the first woman stockbroker in the United States. Her reform activities and her advocacy for free love created controversies and turmoil within the suffrage movement for more than a decade. To Woodhull, free love meant that women had absolute control over their own sexual and reproductive lives. Born in Homer, Ohio, Victoria Woodhull received little education. She married when she was 15 years old and divorced about 11 years later. In 1868, Woodhull and her sister, Tennessee Claflin, moved to New York City and arranged to meet Cornelius Vanderbilt, reputedly the wealthiest man in the United States. Under his tutelage, the two sisters made a fortune in the gold market in 1869. Vanderbilt sponsored their Wall Street brokerage firm, Woodhull, Claflin, and Company, making Woodhull the country's first woman stockbroker. From 1870 to 1876, the sisters published Woodhull and Claflin's Weekly, a financial and reform newspaper that reported on Wall Street fraud, free love, and legalized prostitution in addition to Woodhull's political views.

Woodhull had attended her first women's rights convention in 1869 and heard Susan B. Anthony and Elizabeth Cady Stanton speak on woman suffrage and related topics. In Woodhull and Claflin's Weekly, Woodhull advocated education for girls, declared that her experience demonstrated that women could work in many professions, and argued that women should be paid as well as men. A few weeks before Woodhull and Claflin's Weekly had begun publication, Woodhull had announced her candidacy for president of the United States in the 1872 elections and promoted it through the newspaper.

Woodhull also became involved in Washington politics in 1870, establishing herself as a lobbyist for woman suffrage. In Woodhull and Claflin's Weekly, she wrote that a suffrage amendment was unnecessary if the Constitution were properly interpreted. She argued that women were citizens in the same way that men were and that women paid taxes, as did men. She shared Virginia Minor's belief that the Fourteenth Amendment established women's right to vote, adding that the Fourteenth and Fifteenth Amendments nullified state legislation that prohibited women from voting. She concluded that enabling legislation to clarify the point was all that was necessary and lobbied Congress for it as well as meeting with President Ulysses S. Grant to get his support for her interpretation, but he did not provide the endorsement she wanted. She presented a memorial to the House Judiciary Committee asking for the enabling legislation, but it considered and rejected the idea.

Woodhull's presidential candidacy gained the support of Elizabeth Cady Stanton and Susan B. Anthony in 1871. When the 1872 National Woman Suffrage Association (NWSA) convention met, Woodhull attempted to take the leadership away from Stanton and Anthony, but Anthony prevailed in a tumultuous meeting. Woodhull left the NWSA convention, called her own convention, and formed the Equal Rights Party. The party named Woodhull its presidential nominee and Frederick Douglass its vice presidential nominee. Douglass, however, declined. Shortly after the convention, Woodhull's brokerage failed, and she lost her housing and offices.

Scandal erupted shortly before the November 1872 election. After divorcing her first husband in 1865, Woodhull had married Colonel James Harvey Blood in 1868, although no record of the marriage has been found. In 1871, Woodhull's aging and ill first husband had moved in with Woodhull and her second husband, Blood. The revelation of their uncommon arrangement became a scandal. Woodhull responded with a newspaper article and expounded on her belief in free love “as the only cure for immorality.” To justify her lifestyle, Woodhull revealed in the November 2, 1872 edition of Woodhull and Claflin's Weekly that powerful Brooklyn preacher Henry Ward Beecher was having an affair with Elizabeth Tilton, a parishioner, who was Theodore Tilton's wife. Beecher had been a mentor to and trusted friend of Theodore Tilton. Woodhull and Claflin were arrested and jailed for publishing the Tilton-Beecher scandal, which authorities deemed obscene. They were both later acquitted, but the scandal effectively ended Woodhull's political career. 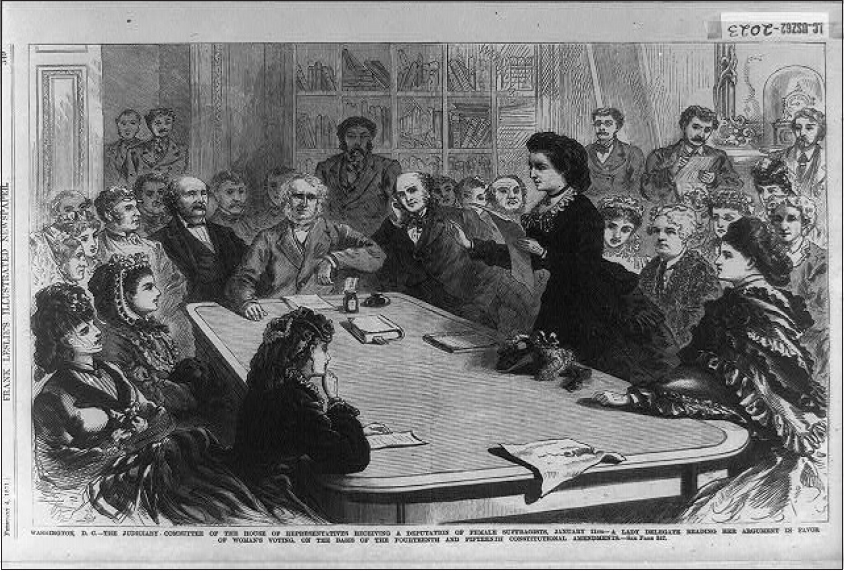 In 1876, Woodhull ended publication of Woodhull and Claflin's Weekly, and the next year she moved to England, where she lectured. She returned to the United States for a second presidential campaign in 1892."